Cervical cancer is the fourth most frequent cancer in women worldwide, representing 6.6 percent of all female-related cancers, according to the World Health Organization (WTO). An estimated 570,000 new cases of cervical cancer were reported worldwide in 2018. The development of AI (artificial intelligence) has helped improve medical treatments. In fact, a research team, led by Sun Xiaorong, chairperson of Wuhan Landing Medical High-tech Co., Ltd., has established the automated, intelligent and standardized Landing cyto-scanning mechanism, to provide diagnoses of cervical cancer. By applying cutting-edge AI and cloud technologies, Sun's team has helped reduce the global mortality rate (from the cancer) of women.

Every day, the laboratory at Sun's company is lit by flashes of dozens of beeping "Landing" AI robots, which are busily searching for hidden cervical cancer cells among the numerous collected cell samples.

Traditionally, doctors have screened women's cell samples through microscopes to detect if the women suffer from cervical cancer. A doctor can screen 100 samples a day, on average. However, a "Landing" robot can screen at least 35,000 samples a day. Given the application of AI technologies, and the online data analyses, cytopathologists can improve their work efficiency by 300 times.

"At present, many regions in China are short of cytopathologists, who analyze cell and tissue samples to diagnose conditions, such as infections and cancers. The application of AI technologies ... can help solve the problem. Also, as machines can work tirelessly, 'AI doctors' are more productive than human doctors, and 'AI doctors' can provide more accurate screening ... In our eyes, a diagnosis is not just a test result, as it matters to a woman's life and a family's wellbeing," says Sun.

Women, she adds, can use their mobile phones to download the results of the screening. In this way, they will be spared the trouble of traveling to the company to fetch their medical reports. 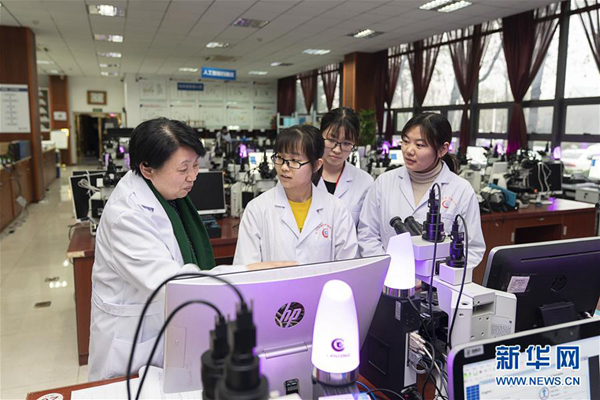 Sun Xiaorong explains the operation instructions of the "Landing" AI robots to three staff members at the testing laboratory. [Xinhua]

"I would have lived a carefree life, dancing in the square (near my house) every day, had I not started my own business. To me, my company is as dear as my child," says Sun.

In 1988, Sun, then a doctor with Tongji Hospital in Wuhan, capital of Central China's Hubei province, went to Monash University (in Australia), to pursue her studies in cytopathology (a branch of pathology that studies and diagnoses diseases on the cellular level). Shortly after she earned her Ph.D. (at the university) in 1993, Sun began a postdoctorate in cytopathology at Sloan Kettering Cancer Center (in New York). In 1996, BC Cancer Research Centre (in Vancouver, Canada) employed her as a researcher.

However, Sun was not satisfied with the "stable life." In 1999, she returned to Wuhan, her hometown. Within a year, she established her company.

"I named my company 'Landing,' which implied both my landing in my hometown and the 'landing' of our AI-assisted diagnostic technology. However, I lacked capital and experience to develop my business during the first few years after I established my company. Before he returned to China to join me in developing 'Landing,' my husband sold our house in Vancouver, so we could use the money to develop new products," recalls Sun. "I also borrowed money from my aged parents, to transform our house into a laboratory, in which we (Sun and her husband) worked day and night. Eventually, we invented the 'Landing' robot."

"Given the fact that China has the largest population in the world, and due to the shortage of medical resources in some regions of the country, especially in rural areas, our AI-assisted diagnostic technology can be widely used in the regions," says Sun.

During the past two decades, Sun has led her employees in providing free screening for cervical cancer to women, especially those in poverty-stricken areas in the country. In recent years, Sun and her employees have participated in more than 100 public-welfare activities, conducted by women's federations, at all levels across Hubei province, to provide assistance to impoverished rural women, to help them prevent and cure cervical and breast cancer (the "two cancers"). Sun is pleased to see she and her employees' efforts have yielded fruitful results; the mortality rate from cancer, among women, has been reduced markedly.

"At the end of 2017, our company provided free screening for cervical cancer to 370,000 poverty-stricken women in Hubei's rural areas, and towns. I hope we can use the advanced technologies to help all Chinese women prevent and cure the disease," says Sun.

In April 2019, the AI-powered, cloud-based cervical-cancer-screening platform, launched by China Maternal and Child Health Association and the Landing AI Cytology Diagnostic Center (under Wuhan University), went online. As a result, an increasing number of women, including those from countries along the Belt and Road Initiative, have benefited from the high-quality, low-cost cervical cancer screening services provided by Sun's company. 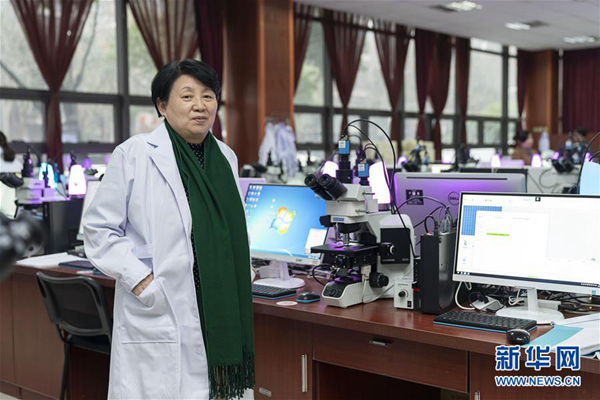 Sun Xiaorong poses for a photo at the testing laboratory. [Xinhua]