Tianfu New Area in Chengdu is bracing itself for a new round of development after the layout of the Chengdu-Chongqing economic circle was recently promoted by the government.

On Jan 3, the Chinese central government stressed the significance of the Chengdu-Chongqing economic circle, attaching great importance to its development as a new economic engine in western China.

As a core part of the economic circle, Tianfu New Area, a national-level new area approved by the State Council in 2014, aims to take the lead in promoting the development.

On April 23, the second joint meeting of Chongqing Liangjiang New Area and Tianfu New Area was held in Chongqing, following the first session of the joint meeting held on Feb 28, and a summit for local industry in the economic circle on March 26.

At the second joint meeting, the two sides signed a strategic cooperation agreement.

With the goal of achieving overall linkage and coordinated planning, the two sides have reached agreements in seven areas including inland opening-up, transport connectivity and the construction of a science and technology innovation center.

Chengdu Science Town, an innovative entrepreneurship landmark in Tianfu New Area which opened in 2015, was emphasized as a major force in the newly-signed strategy.

A top-tier supercomputing center in China's western region, one of the most representative "new infrastructure" projects in Chengdu, is located in Chengdu Science Town. Its construction is expected to be completed in the second half of 2020.

With the completion of the center, a new industrial ecosystem for innovation should be fostered, according to local officials.

Another major scientific project in Chengdu Science Town, the Huawei Kunpeng ecological base, which settled in the town in August last year, is also moving forward at speed.

Besides the two major projects, the town has established seven platforms for scientific studies and interdisciplinary research, 16 national-level innovation platforms and 37 projects run under the joint efforts of research institutes, universities and local administrations, aimed at building up a comprehensive innovation platform involving basic scientific research and research outcome commercialization.

According to the local committee of Chengdu Science Town, more than 80 major industrial projects by industrial leaders such as Hikvision and SenseTime will be introduced, which are expected to bring together more than 9,800 enterprises involved in the "new economy".

Building up a new model for inland opening-up is another key task in the construction of the Chengdu-Chongqing economic circle.

It is attempting to establish a comprehensive free trade harbor and is accelerating the construction of an all-round, wide-ranging and high-level pattern to operate with foreign trade businesses.

"The strategic cooperation agreements between the two national-level new areas has brought new opportunities to companies in areas such as new technologies, innovation platforms and markets," said Wang Zhongxun, vice-president of CloudWalk Technology.

As the only one unicorn enterprise-a startup valued at over $1 billion-engaged in artificial intelligence in western China, Cloud-Walk has drawn up its layout in both the Tianfu New Area and Liangjiang New Area.

At the end of last year, it relocated its regional headquarters working under the framework of the Belt and Road Initiative and research center for western China to the new industrial park at Xinglong Lake in Chengdu.

According to Wang, the company will work on the construction of smart cities, enable the upgrade of traditional enterprises and bring more intelligence to people's lives through AI.

SenseTime is another high-tech company located in the area. At its Chengdu headquarters, its products under research have covered fields such as smart cities, intelligent hardware, transport, real estate, finance and education.

"The strengthening of links in transport, major projects and major industries in Chengdu and Chongqing has brought plenty of market opportunities for the company's development," said Wang Jue, general manager of SenseTime Chengdu branch.

Liang Chunyan, president of Qincheng Culture and Tourism Group, said that the construction of the Chengdu-Chongqing economic circle has contributed to resource-sharing in the two areas, which is beneficial to improving efficiency and reducing market costs.

Qincheng will follow the steps of Tianfu New Area and take advantage of opportunities brought by the Chengdu-Chongqing economic circle, Liang said.

A bird's-eye view of Tianfu New Area, a national-level new area in Chengdu that aims to take the lead in promoting the Chengdu-Chongqing economic circle development. CHINA DAILY 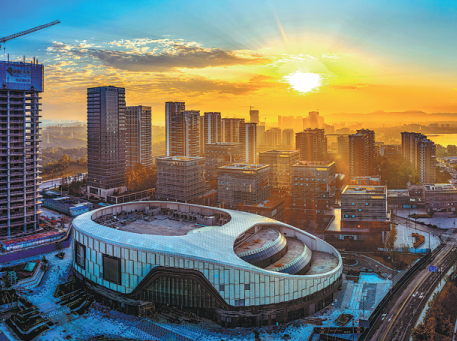 An industrial park is under construction at Chengdu's Xinglong Lake, a place gathering a group of high-tech enterprises. CHINA DAILY 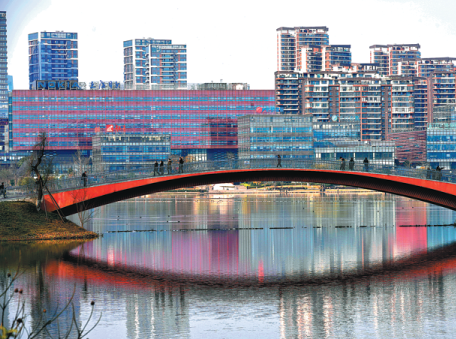